I have a Rockpro64 SBC (single board computer) in this case running OpenMediaVault as my home’s NAS and server for other self-hosted services. I chose this board as it is one of the more powerful SBC’s that is quiet and has low power consumption, and it was specifically built for this. It has two 8TB drives in it in RAID 1 configuration. One thing worth mentioning, using a SBC with an ARM CPU may limit some software availability, but as ARM becomes more popular this will be less of a problem. I’ve only ran into a few services that I would have liked to try that were X86 only.

I’m going to list and describe all the services I run on my NAS and some of my favorite self-hosted services. Over the last few years I’ve been getting more and more into self-hosting. This is the process of hosting cloud-like services yourself, on your own network to gain control and privacy over your data. Below is an image of my dashboard which shows most of them. 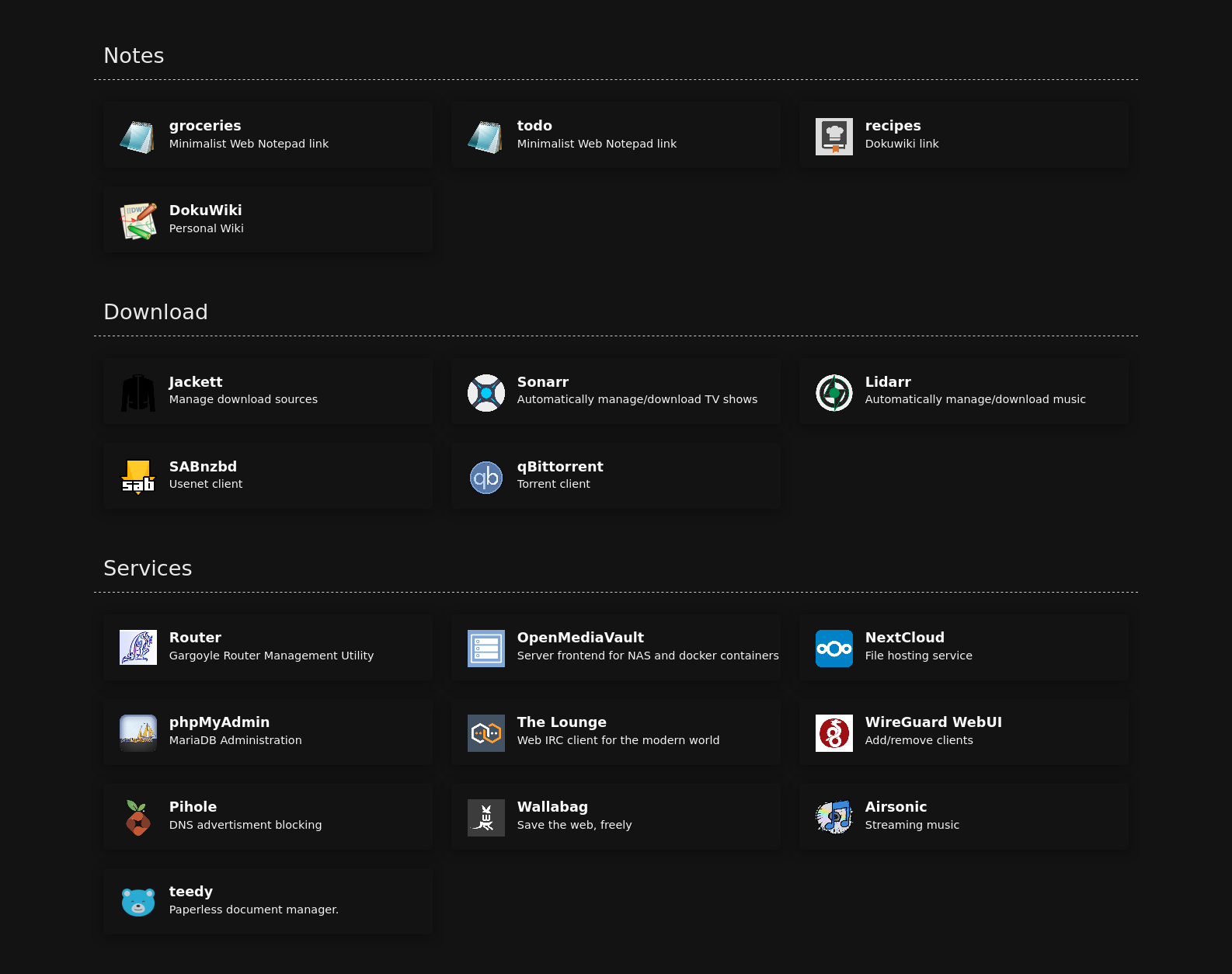 These are only a few of the services you could run on your own server. For a really good list of other self-hosted applications check out the awesome-selfhosted list.

This is a cursory look at the directory structure of my NAS just to give an idea of how it is organized:

And next on to some of my favorite services that I run on it.

WireGuard - A fast, secure, and reliable VPN that allows me access to all of my services at home when I’m away without having to actually expose those services to the WAN. My phone automatically connects to it as soon as it disconnects from my home WiFi with Tasker. It also allows me to remain secure while connected to unknown WiFi access points on my laptops.

SSH Tunnel - It runs on port 443 and can be used in the same way as the VPN and also to bypass strict firewalls that are doing deep packet inspection and actively blocking VPNs.

Teedy - Instead of having a filing cabinet full of paper documents, I scan them and upload them. Teedy allows you to tag the scans, add descriptions, dates, and more. It also has OCR which means that you can run text searches on your scans. So if you upload a bill from Some Company, LLC you can just search for “Some Company” and it will list all the documents that have those words in them. I’ve been scanning receipts I may need later, manuals that come with purchases, and other important documents.

Homer dashboard - A simple dashboard for quick and convenient access to all my services. See the screenshot in this post above for what it looks like.

nginx - It’s a load balancer and web server. I use it to serve up the Homer dashboard and Dokuwiki locally, but I have been thinking of serving this website with it behind Cloudflare… it’d save some hosting costs.

DokuWiki - It’s a way to organize information, I started with Bookstack but now prefer this. I use it to keep track of how I solve problems on a computer or set something up on a server that I haven’t committed to memory and may need to reference later. I also similarly keep track of vehicle maintenance and upgrades and other projects with it.

Nextcloud - In simplest terms I would say it’s a Google Drive and Evernote replacement, but it can do much more than I can describe here through it’s plugin interface. I strictly use it to backup pictures/videos/documents from my phone automatically.

AirSonic - Allows me to stream my entire music collection.

Wallabag - Archives web pages. Allows for tagging and searching your entire archive to easily find the information or page you want to see. I’ve found it doesn’t work for every page the way I would like, but it is the best option I’ve found so far.

Pihole - Blocks DNS requests to known advertisers. I set non-rooted android devices to use this for DNS so that I can still block ads on them.

Minimalist Web Notepad - A simple notepad that can be opened from any browser. It saves/opens files based on the URL and it’s very fast, I use it for quick notes that don’t need to go into Bookstack or Joplin. There is also a fork of this with a few more features.

m3ufilter - This is a tool for filtering and organizing m3u files. It can output to a file or serve them up on a port that you specify. I made a post on configuring m3ufilter.

The Lounge - It’s an IRC client, I like both this one and quassel, but this is what I currently am using.

Lidarr - Makes managing and downloading your music collection easier. It lists all the albums of artists you add and then allows you to download them by finding it on multiple sources (torrent trackers and on usenet) and places the download in the correct folder automatically.

Sonarr - This does basically the same thing as Lidarr but for TV shows. I used to just use RSS feeds in a torrent client but have recently switched to doing it this way.

Jackett - This allows you to combine and manage multiple torrent trackers that services like Sonarr and Lidarr will query.

SABnzbd - A usenet downloader that can be used in services like Sonarr and Lidarr to download from usenets.

qBittorrent - My favorite torrent client whether it be on desktop or server.